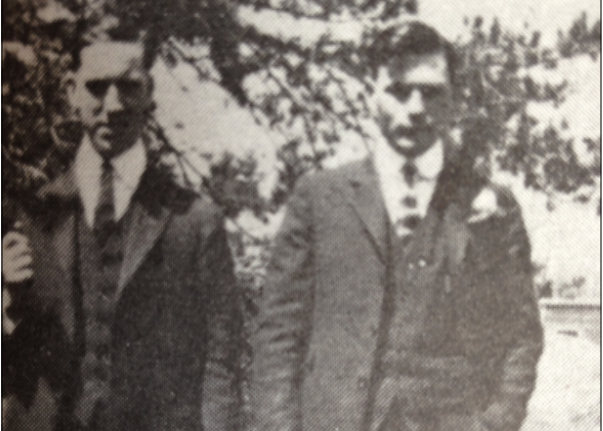 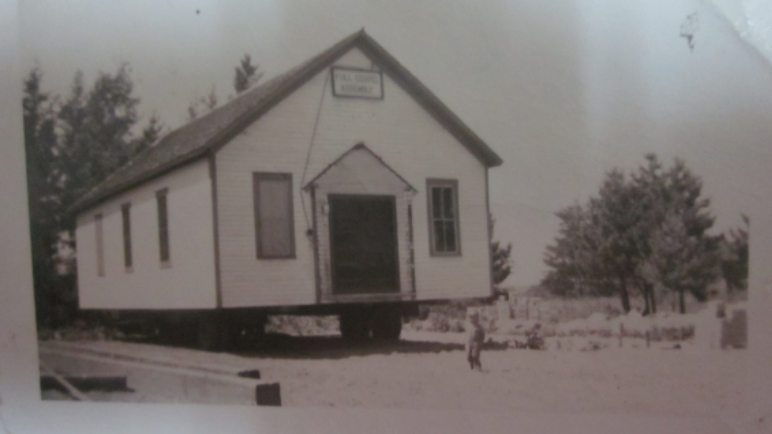 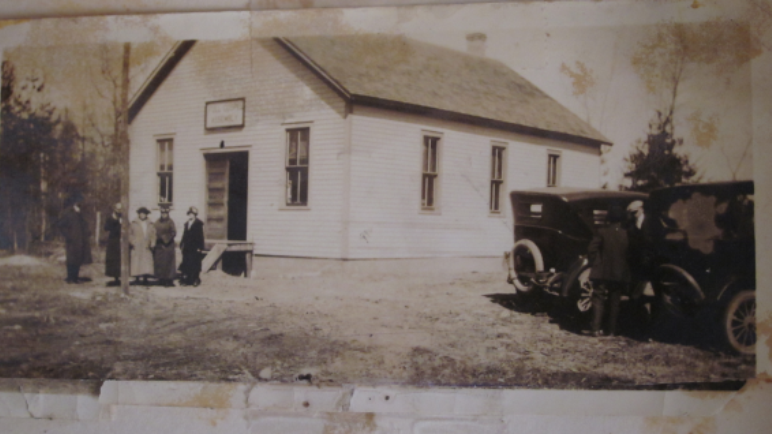 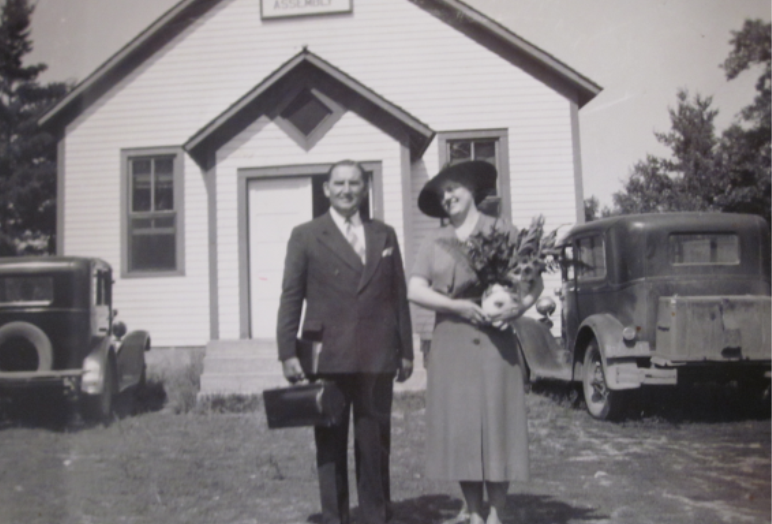 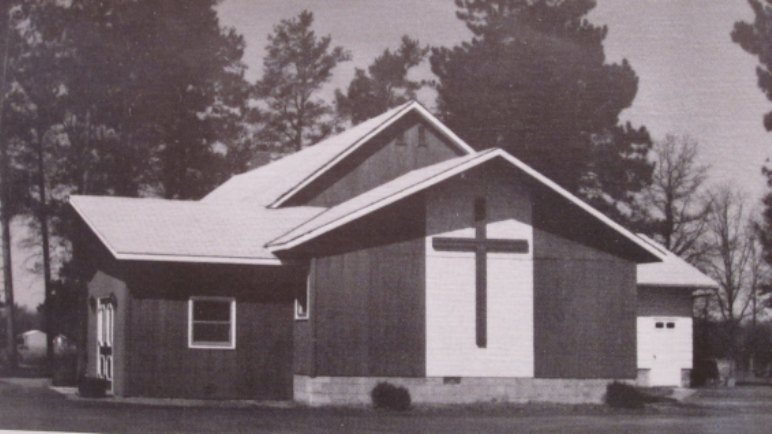 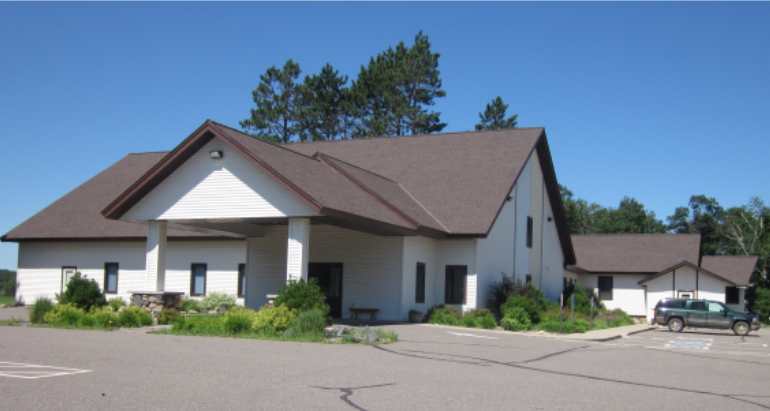 The Community Called Casino
In the 1880’s several families came to this area to log. In 1889 the Horn family settled just north of here. From there they could hear the trains whistle on the track that Pilllsbury Mills put in to move logs to Gull Lake. By the late 1890’s, native timber was gone and families went to dairy farming.

The community received it’s post office, set up in the home of William Bryant (1 mile northwest of the church) in 1895, officially placing the town on the map. Originally the area was first known as Cass, then changed to Casino in 1897.

Every 4th of July in the 1880s a big celebration was held at the Woodman Hall located on the northeast corner directly adjacent to the present church property. This building was a lodge and gathering place for the community. It housed a local casino, which influenced the name of the community.

Woodman Hall, Sunrise School, a post office, and later a church made up the town of Casino. Woodman Hall disappeared in 1942 (Pleasant Hill church took it down and used the lumber to build their church), Sunrise School was consolidated with Pillager School in 1949, and the post office left Casino in the early 1900’s. This left a community of homes, farms and a church. The name Casino seemed to stick to the area where the church bears its name.

Casino Needs A Church
The first meetings of the church were held in the fall of 1921 in the Sunrise School located one mile north of the present church. But God had a plan for the community of Casino and was working out the details before anyone even noticed.

In the spring of 1921, having had experienced ministry in Pennsylvania, Rev. James Menzie offered to go anywhere God wanted him. He asked Superintendent Ben Hardin, who had traveled extensively, where the most needy field was. Rev. Hardin replied that he felt it would be Minnesota so Menzie purchased a truck, folding chairs and ordered a tent. (They also bought tent poles not realizing they would be ministering in forest country.)

When he told Rev. Hardin he felt he should have someone go along with him, he was asked who he had in mind. He answered, “Frank Lindquist.” Brother Hardin responded, “Fine, Frank hasn’t a call to ministry but he could lead your song service. Rev. Lindquist later helped to establish the work in Brainerd and was pastor there and at the Minneapolis Gospel Tabernacle for over 30 hears. He also founded North Central Bible College. Rev. Menzie used to say, “Not bad for a song leader.”

After a stop over in Chicago and Staples, the two men pitched their tent in Brainerd and had services there until it was too cold. A small church was rented for the congregation who later purchased the building.

While in Brainerd the brothers also ministered in Crosby, Pillager, and again in Staples. It was suggested by Mrs. Bryant of Staples that the men hold services in the small community of Casino where she was concerned for her brother, George Horn, and his large family of ten sons and one daughter, Helen. Rev. Menzie consented and walked the 10 miles from the Pillager railroad to the Casino community.

Two weeks of meetings were held in the Sunrise School that fall of 1921 which began a revival in the area. The following summer (1922), Rev. Menzie pitched a revival tent for special meeting against some opposition. Signs were posted by someone stating, “Holy Rollers Camp Meeting” and “The Devil is Here”. Firecrackers were set off and acid was thrown on the tent. But that did not stop Rev. Menzie from preaching the gospel. The Holy Spirit moved in a mighty way. Many were saved and filled with the Holy Spirit.

Rev. Menzie later stated that in forty years of ministry he had never witnessed such a visitation from God as on the night of June 25, 1922 in Casino, Minnesota.  Rev. Bartlett Peterson, age fourteen was saved in that revival. He later became the Secretary-Treasurer of the USA Assemblies of God at Springfield, MO. Helen Horn and Ada Peterson because evangelists and ministers. The church continued and gained favor in the community.

The congregation built their church building under the ministry of Rev. James Menzie in 1922. It was located one-fourth mile east of the present location. The original church was 24’ x 40’ with a 24’ x 20’ storage and furnace room in the basement. Gas lights were used but in the early 40’s it was wired with electricity.

We’ve Come This Far By Faith. Casino Church: Alive and Well
We have grown through the past 90 years of ministry in the Casino community. Under the leadership of Pastor Dan Johnson the church now reports:
•  Average attendance of about 150, with an annual budget of nearly $200,000
•  At least 74 families call Casino their “home church”
•  There are 72 members of Casino Assembly of God
•  We regularly financially support 28 missionaries, and others who speak monthly in our services.
•  Our church have sent people on mission trips to LA, CO, and Mexico
•  We supported Heart and Hands, a thrift store in Motley
•  We offer Religious Education to over 100 children through the Pillager School release time program
•  Monthly we offer a meal through the Soup Kitchen in Brainerd
•  Casino Assembly of God is a member of the Ministerial Association in Pillager which regularly offers Thanksgiving and Easter services in the Pillager community
•  Missionettes and/or Royal Rangers have been an important part of our Children’s Ministry program for at least 45 years.
•  Every year we offer several major outreach events: Spa for the Soul for the ladies of our community, Wild Game Feed designed for the families of the Casino area, a Live Drive-thru Nativity, Fall Festival and VBS or summer family event. All of these events bring many un-churched people to our campus and introduce them to the gospel of Jesus Christ.
• We continue Sunday evening services and Sunday School for all ages.
•  We are again talking about adding to the building to meet the needs of our growing congregation, including children and youth ministries.


​Did you know this about Casino Assembly of God?
· The cross at the back of the sanctuary was cut from lumber harvested off our property.
· The county moved the road when we built our current sanctuary to accommodate our plans.
· The stained glass…..
· Our basketball and volleyball courts are used nearly every week by our youth and young adults?
· The church used to have an “orchestra” that played nearly every Sunday during worship.
· A “rodeo ministry” was used for several years by Casino Church to introduce the gospel to people.
· The old sanctuary had individual seats instead of pews, like theatre seating.
· During that first tent revival, scoffers would steal parts off the cars in the parking lot, just to annoy the congregation.
· There have been at least 23 people from Casino who have gone on to full-time ministry.
· At least 30 people from Casino have gone away to Bible college or university.
· The mortgage for the 2002 addition was burned in 2009, only taking 7 years to pay off a 15-year debt!
· The wood-cutting parties were an important part of our church life until 1990.
· Just for the record, we want to state that the Casino church family LOVES their pastor and his family!